Everyone is excited about fair season here in Washington. Seems every other week there’s a county fair, state fair, city fair. But the best event of all is … wait for it … the upcoming Fall Fecal Fest. No shit. No, I am not shitting you. It’s a festival of poo.

It’s obviously a big deal because you can’t just go and purchase the doodoo, you have to put your name into a lottery. THEN you have the chance to purchase an alarming amount of zoo doo – ranging from hippo, giraffe, zebra or if you want mass quantities, elephant feces. If you want a big old pail – 4 gallons – you can only get it during the holidays, and it’s aptly named “Holidoo.” I’m rushing to the site right now to put my name on the waiting list.

New this year is worm doo. It’s more pricey than Holidoo – which goes for $20 for the 4 gallons. Worm doo is $10 a pint. You must be able to pan for gold in worm poop. All that excitement over excrement makes this former city girl’s head spin.

I am learning but I still cringe when Brad wants to take our truck and trailer over to the cow farm to get ripe manure. I think, dear God, the neighbors will shoot us if we cover our 16 acres in a steaming mass of … well, you get the picture. But no. They cheer him on. I keep trying to tell them “do NOT encourage him” but they think it’s a grand old idea and even encourage him to go to the sheep farm down the street, because sheep really make superior fertilizer.

I’m all over having a productive garden. I haven’t had to buy vegetables in a month. And I think that’s grand. I think Brad should make use of all the poo our chickens produce. And chickens do poo. Lots of it. But it’s all mixed in with straw and doesn’t smell. I’ve driven past the sheep farm. Sheep poo smells to high heaven. I just can’t get past that gag factor.

But poo has become a major topic of discussion around these parts. I am truly trying to assimilate, but there are some things I just can’t make myself do. I can’t call our creek a crick, and I can’t carry on long conversations about things that should remain unmentionable.

When we first “set aspell” with our neighbors after we moved here (it’s a year  since we moved to Washington country and started Reluctant Farm) our neighbor said “oh, I’ll have to make you some worm tea.

No. Really, thanks but no. I mean, it’s nice of you, but please no. I really, really love tea. I mean tea is, well, my cup of tea.

A week later we were gifted with a worm bin, from which to extract worm tea. I haven’t participated in the extraction process, as I truly feel my strengths lie elsewhere. Anywhere else. But Brad adores his worm bin, faithfully feeds it coffee grounds every day, and uses the worm tea for the garden.

So my visions of sitting on my veranda, sipping my elegant Lady Grey tea, looking out at the sunrise and rolling green hills on our property has taken a back seat to the harsh reality of sitting on the porch, breathing through my mouth because my whole front yard will smell like sheep shit.

Because Christmas comes but once a year, I have a scathingly brilliant idea for Brad’s gift this year. Because I love my husband like crazy. And yes, it’s bigger than a bread box … 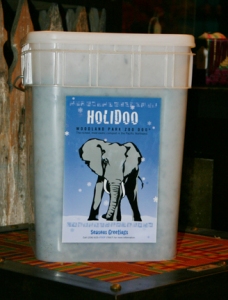