As I’ve said previously, my vision of our home on 16 acres that we purchased last year did not necessarily coincide with what my husband had in mind. I thought, Ok, maybe a 20×20 foot garden would be nice He had different ideas. So, I went with the flow.

And the flow kept flowing. Downhill. Into a big stinking pile.

After a couple of months creating an area that was less garden and more sprawling plantation, Brad says to me “I need a tractor.”

“You need a tractor for some tomatoes and green peppers? Why?”

“Because it will make things so much easier on me and my back.”

I know Brad works hard out there and when he plays the “back” card, I generally acquiesce. I know his back is not always in the best of shape, and if I make too much of a fuss, and it goes totally out, I’d never live with myself. So I made peace with myself that I’ll live with a guy who rides a tractor. And gleefully Brad set forth finding a tractor that would work for him, with a price that would allow us to actually keep the home and property for which the tractor was needed.

Luckily (maybe?) he had a buddy who had the perfect tractor. A buddy like Brad who “needed a tractor” because he was going to move to the South Pacific and wanted to use it on his property. He never moved, and so the tractor stayed in a shipping container, at his California home, for 5 years. Brad got a killer deal, and a payment plan.

All we had to do was pick it up. And for that, we’d need to buy a truck in which to haul it. Because renting a  U-Haul for the job would cost almost a much as the tractor itself. And so it started…

Because we didn’t have the funds for both purchases, we opted for the barter system. We had property we didn’t want in Utah. A Utah man wanted it, and had a truck. The perfect truck.

We did the switch, Brad flew to Salt Lake City, met with a mechanic who gave the truck his gold seal, and the “good Christian man” who traded pink slip for property deed.

20 minutes out of Utah, into bum-flock Idaho, the truck broke down. It had to be hauled to the nearest town (a loose translation) where the mechanic deemed it dead as a doornail. Dead as carrion. Dead as our checking account because it needed a whole new engine.

“But now, really Susan, we have a whole new truck. So it’s not entirely a bad thing.”

Hauling the tractor back from California to Western Washington, Brad basked in the praise he got in every corner outpost we stopped. Someone along the way would inevitably stop and say “wow, that’s a mighty nice tractor you got there. I remember riding one of those in oh 4.” Around the tractor trailer they’d circle, talking the merits of Kabota over John Deere … “you know, Kabota makes their own engines and parts, John Deere doesn’t.” As I’m furiously snapping photos on my phone and sending SOS emails to my friends on Facebook. Get me out of this hell I’ve landed. 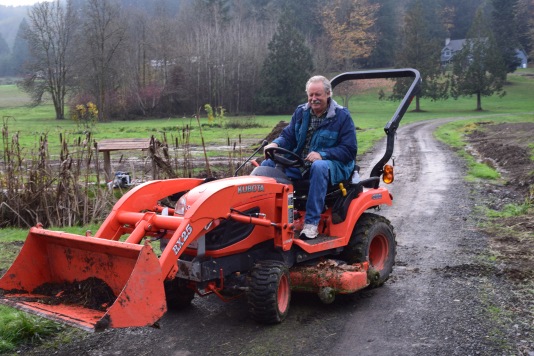 So, when we get the tractor unloaded at the house, and Brad’s ready to suit up for his inaugural ride, I ask him, “hey Farm Boy! You gonna plow some fields?” And he says to me “I don’t have a plow.”

“What do you mean you don’t have a plow? We’re going to be paying monthly on this beast until the end of times, and it doesn’t plow the fields? What does it do?”

“Well, we got a lawnmower attachment, and a shredder chipper that we didn’t even pay for – it was included in the price.”

Which is a big yippee except that we already had a riding lawnmower that came with the house, AND we had a shredded/chipper that Brad bought from my Dad.

“But these are bigger more powerful. I will be able to cut to cut the lawn so much faster.”

Because, of course, he has those all important corporate meetings to attend. With Neighbor Bob, Neighbor Les, and Neighbor Matt. So they can sit around, drink beer, and talk about tractors.

Last week Brad said that we “needed to” rent a rototiller. “But we have a rototiller” I said. “Yes, but it’s not big enough and strong enough for this soil.”

“But what about the tractor?”

“It didn’t come with a rototiller.”

What exactly did we “need” the tractor for? “To move dirt.”

Ahhh. Moving shit. I get it. If you have a pile of shit in one place, are bored and need to move the pile of shit around to another place, you can sit on a tractor and be one of the guys. Makes perfect sense.

Because of this shit movement, I see my husband only when the sun is down. Because shit moving must be either A. fascinating or B. terribly important and time consuming. Coupled with the grass mowing and the leaf shredding, it’s a full time job. My husband went from gentleman farmer to shit mover.

And the other day he came home from the farm store with black suspenders.

5 thoughts on “Give the Man a Tractor!”