I’m not afraid of a lot of things. Speaking in public. Stinging things. Something stuck in my clothing. The Angel of Death. Liver. That’s about it. In the past, however, I had an abject fear of goats. Not a good look for a farmgirl, reluctant or not.

It started in second grade. My parents took me to some sort of amusement park that had a petting zoo.I was dressed the way my mother always dressed me – in shiny, squeaky patent leather shoes, anklets with lace on top, the obligatory plaid cotton dress with puffed sleeves and a little white apron thing that buttoned onto the dress. I tried to Google the whole look so I could share it in vivid, Kodak color, but it is so atrocious that Google doesn’t even archive it. And Google archives everything. Including how Venice Beach celebrated the Mardi Gras in the 1930s… 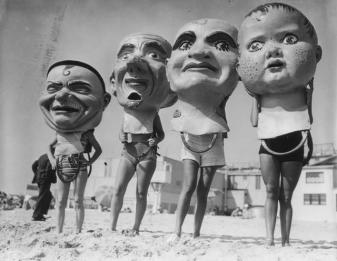 Scary. But not as scary as goats to a second grader.

Armed with goat chow, I was unceremoniously shoved into the petting zoo pen, to “play with” the goats. At that time there weren’t many other children in the pen and I seemed to be the one with the biggest cup of chow, because soon my 7 year old self was engulfed in goat faces and hungry goat mouths that probably hadn’t eaten for a few days so that the zoo keeper could entertain the masses and laugh behind children’s backs.

They not only devoured the chow in 10 seconds, chow that I was so diligently trying to hold over my head, they also started to eat the apron right off my body.

Flash forward to college. I was 20 years old and invited by my roommate for a weekend away from the dorm food and the rigors of university life. Lisa’s family lived in a private community and had acreage. Her father didn’t cotton to the job of mowing all that lawn, so he purchased … you got it … nature’s best lawnmower – a goat. Lisa invited me into the pen, and I joined her with trepidation. But, hey, I was a college girl, I would do anything at least once. Kinda. Unless it involved speaking in public, stinging things, stuff crawling around in my clothes, or liver.

As soon as I stepped through the gate and walked to the middle of what seemed to be a 10 acre yard, the goat took chase, jumping on his hind legs, head askew, eyes looking wild and feverous, in an attempt to butt us with his horns. I practically vomited on the spot.

So when my husband said that it’s time to add goats to the reluctant farm, I felt my knees buckle. This was, perhaps, my Waterloo. End of the road. Karma bitting me on my Kardashian. I felt kinda like I did as a Catholic schoolgirl when it was suggested that purgatory may not exist. I was banking on the fact that, while I didn’t think I’d maim or murder someone in my lifetime, I was also sure that I had already passed the “lily white” stage at age 8 and my only hope is that I could set awhile in purgatory. Where all the souls on earth would pray for me to eventually “fly up” to a more desired locale.

But I pulled up my big girl yoga pants and went with Brad to a goat farm. Where we bought a doe and a buck (please don’t call them “nanny” or “billy.” That is so not PC anymore. And yes, I was schooled by goat people). And because goats are social creatures and do not like to be alone, we bought 2 wether companions – one for the buck and one for the doe. A wether is basically a male without his, well, parts intact. One of the “companions” had just recently been “wethered” and he hadn’t quite “weathered” it well. Goat people do this sensitive job by basically wrapping what looks like a very tight rubber band around a male goat’s papayas. But until they fall off (which they eventually will, Brad promised) they have enough of their manliness left to still feel a bit of the mojo.

I was horrified when the two males started doing a savage dance straight out of National Geographic. Rising up and leaping into the air, connecting horn stubs as they jabbed each other on the head, and coming out all bloody and wild eyed. I was sickened. “And this is why we shouldn’t have goats” I yelled at Brad as I stared at the spectacle in horror. It was violent. And it was vile. I would have run away but I was frozen to the spot.

Eventually, as these things go when you are reluctant as I tend to be, I cam to realize that goats have their purpose. They are great at trimming the pasture grass. They have the best personalities – when they aren’t trying to kill each other. And, yeah, I kinda like them. A whole lot.

Now I like them even more. Now that we added two more. Two more that became part of the family 6 days ago. The result of when our doe and buck made hay 150 days ago. 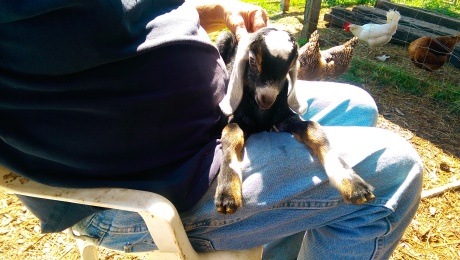 And now I have 2 kids. A boy and a girl. Two little stuffed toys I can pick up, hold in my lap, kiss on the little nose and totally love them up. I want more. I want a whole passel full of goats!

I want to buy little pajamas for them, dress them up for the holidays, take them with me on my morning walk. I want them in the house. I want to live my life, forever, with goats. 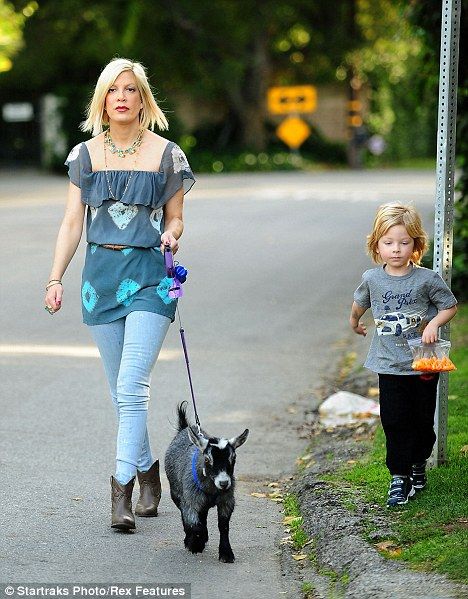 I want us to breed more and more goats. To have these little lovies roaming around my pasture so I can run down and see their little faces and hear their little goat voices calling to me. And because we can’t very well breed our baby doe to her brother (Ick) or to her father (double ick) because we don’t want crazy eyed babies, I’ve begged Brad to bring me back to the goat farm, so we can get some more “breeding stock.” Because, people, I LOVE GOATS…